Gola was invaded by the spirit of Halloween, scary and spooky as it could be!
The Club was also haunted in this atmosphere, so a scavenger hunt was waiting for the kids.
They had to overcome curses, doughnut-eating and yaky tasks, but they made it!
What do you think about it?

Back in the Club!

We're back in the club, after a well-deserved summer break!
As a nice remembrance of our activities, here are some snippets from our last play, The Swiss Family Robinson, based on the book we read during the second term and written by the club's members. We had fun before, meanwhile and after it, as you will see, and we hope that you will all enjoy it as much as we did!

Both teams ready!
Good recipes at hand!
We had a good time and it all ended in a tie.
Can't wait for the next one! 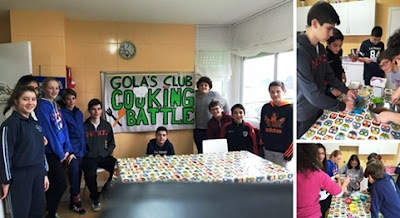 A Christmas Carol - The Play

Last year’s goal was achieved! The kids worked really hard on this play. They rehearsed for two months, they studied their parts by heart and got committed to it. They worked as a team while drawing the background and they enjoyed the result. Their parents coming to see them was quite an experience. This is getting professional!! Good job guys!!
Publicado por Gola en 3:11 No hay comentarios:

"I was Mr. Scrooge. I liked my character. There were two Scrooges because the part was really long.
We had a lot of fun and we worked so hard. Then we had to choose our costumes and prepare the setting. First we acted for the kids, but it was a disaster, because we didn't know when we had to go in and when we had to stay on stage. But then we acted for our parents. I was so nervous! It was good. Everybody did it very well and the parents that came liked it very much."
Sara


“I played Man Two. I was in the future with Man One, talking about Scrooge. I liked my part a lot because I only spoke three times and I didn’t have problems to memorize my part! I liked the play because it was very funny and we laughed a lot during rehearsals.
Carlos


“I played Narrator 2. My part was long but it wasn’t difficult. I also helped my teacher with the curtain. I thinks that people who did it better were Sara and Guille because they were the main characters. People think that the paly was fantastic and good. I don’t like acting, but I think just the same as my classmates do.”
Alicia

“I played the first part of the main character, Scrooge. I liked the play, I love acting and my character was really good for that. I think we did a very good job. We also made very nice crafts for the background. They were really original.”


“My part was Boy 1. He was a boy who was walking on the street. Suddenly Scrooge shouts at him and gives him money to buy a turkey. It took us a long time to prepare the play, we’ve been working for two months. I liked it, but I don’t want to act again, I don’t like people watching me.”
Jenni


“I played the Ghost of Christmas Past. I was going with Scrooge and visited his past life: the school he attended, his house… The first time we acted it was a disaster because we didn’t know when to go on stage or when to go out, but the second time was much better. I liked the play a lot, my favourite actor was Guille.”
Anxo


“My part was Bob Cratchit, Scrooge’s clerk. He is a poor clerk with a wife and kids, earning the minimal salary. Mrs. Cratchit and him don’t have enough money to buy food, so in the end Scrooge buys a turkey for the family. I liked my part because I like acting in plays, but I didn’t know about that because I had never done it in English before!”
Jessica


“The play was funny and amusing. I played the Ghost of Christmas Present and had to memorize one and a half pages. I prepared my part a lot, so that people would enjoy it. “
Jacobo


"My character was the Woman. She was young Scrooge's girlfriend. I only had three lines to learn, I had a lot of exams and I couldn't study for the play. My favourite activity was painting the background."
Helena
Publicado por Gola en 6:21 No hay comentarios: